How Small Medical Errors Can Turn into HUGE Malpractice Claims 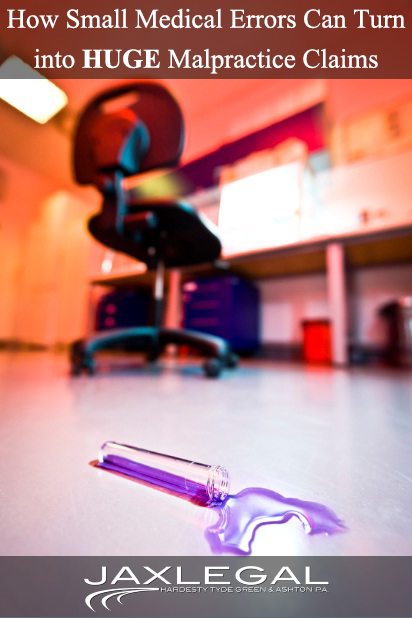 Medical malpractice arises when a healthcare professional commits an error that causes some kind of harm. Some mistakes can be serious—like operating on the wrong half of someone’s brain—while others can seem small at first.

Here are a few examples of medical malpractice that resulted from tiny medical mistakes.

Administering Anesthesia: Is it Enough?

One particular patient underwent eye surgery where she was going to completely remove her eye. The healthcare professionals administered two drugs to help with the procedure. One paralyzed her so that she would not move and bump the doctors while they worked. The other was anesthesia that would put her to sleep.

Unfortunately, she got enough of the paralyzing element and not enough of the sleeping element. She was awake for nearly half of her surgery and unable to move. She could, however, hear the doctors saying things like “cut deeper” and “pull harder.” She was absolutely traumatized by the experience.

There are roughly 1,500 reports of surgeons leaving objects behind after surgery in the United States every year. It can be extremely painful and cause a whole host of other problems such as infection or internal bleeding.

Another patient had a procedure done when an object was left behind. In this patient’s case, the object was more than just a sponge or something small; it was was a 10-inch long retractor!

The retractor was embedded inside his chest after surgery and caused him agonizing pain. Instead of addressing the problem, the hospital insisted that his pain was “all in his head” and suggested psychiatric care. He was finally given a CT scan and the item was detected and removed about one month later.

Getting a proper diagnosis is dependent on a variety of factors, including, in some cases, lab test results. These simple tests can determine whether someone has a serious disease or the common cold.

Mixing up these results can be disastrous—as we saw with one case. This particular patient was getting a standard X-ray at the dentist when they noticed a large lump on her jaw. She was later told she had just a few months to live because she had cancer.

The doctors thought they could extend her life by having a portion of her chin removed up to her ear. She underwent the procedure and was slightly disfigured, but happy to have the extra time to spend with her family. Three months later, the doctors asked her back to the hospital. They explained that the lab had mixed up the results and she did not have cancer at all. Now, she was partially disfigured, with no threat of impending death, for absolutely no reason.

We trust our doctors and other healthcare professionals to give us sound advice. We also expect them to be thorough and careful when dealing with our health. However, this is not always the case and accidents happen.

If this type of accident has happened to you or a loved one, speak with experienced medical malpractice lawyers in Jacksonville to get help. Call Hardesty, Tyde, Green, Aston & Clifton, PA at 904-414-4906.