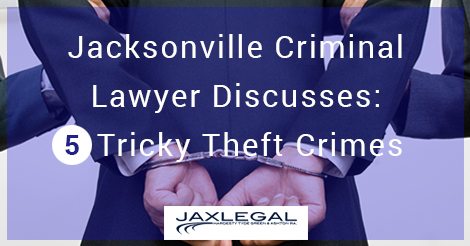 Although many people think of “theft” as a pretty straightforward offense, it can be complicated. There are several different types of theft crimes in Florida, and each one has its own list of things that the state must prove as well as consequences.

Knowing which crime you have been charged with will be extremely important to your defense. A Jacksonville criminal defense lawyer can provide more information.

Types of Theft Crimes in Florida

According to Florida law, “theft” is defined as an intentional taking or usage of another person’s right to property or benefit from a property. This taking can be either temporary or permanent.

That means that if you “borrow” something without permission, then that is considered theft as well.

There are also subcategories of theft, which can include:

Within these categories, there are also “degrees” of theft, which basically increases the severity as you go up from third-degree theft.

The highest level of theft, then, is grand theft in the first degree. At this level, prison time could be up to 30 years! On the other end of the spectrum, petit theft in the third degree includes a maximum amount of jail time of 60 days.

Other Florida Crimes that Involve Stealing

Theft is not the only crime in Florida that involves taking someone else’s property or the benefit that they gain from that property.

Larceny is a theft crime, but the term is not often used in Florida. Larceny is basically the dated version of the modern law of theft in Florida. Other theft-related crimes may include:

If the trusted person takes that property for their own use or enjoyment, then they may have committed the crime of embezzlement.

You often see this type of situation in the context of jobs or positions that involve a great deal of handling money, but they can happen in personal relationships as well.

It must be paired with a taking by force or the threat of force. In addition, if the person who is charged with the crime had a weapon, then the charges are often more serious.

In the state of Florida, if you take something that you obtained by using fraud or false pretenses, then that is also considered theft.

An example may be that you convince your friend that he or she still owes you money even though they already paid you. Although this may seem innocent enough, it is technically theft and illegal.

For example, the penalties may be higher if the theft involves stealing from someone who is over the age of 65. Theft of a motor vehicle often comes with different penalties as well.

If you or a loved one has been charged with any type of theft or any other stealing charge, you need an experienced Jacksonville criminal defense lawyer on your side.

Visit here to begin working on your case with a Jacksonville criminal defense attorney.