Did the Surgeon Leave Something Inside Your Body After an Operation? Here’s What to Do 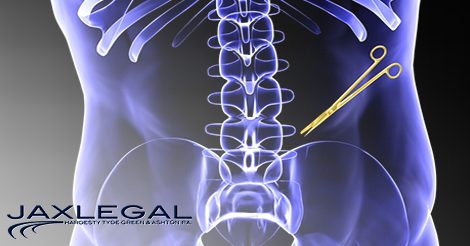 If you discover after the fact that your surgeon left something inside your body after a recent medical procedure, this can be an alarming experience and one that warrants the insight of a Florida medical malpractice attorney.

The Truth About Medical Malpractice

This translates to an average of 700 people every day in the United States dying as a result of medical mistakes. Many people who’ve gone through the process of having surgery will be told that there is a recovery period where they may struggle and face some challenges.

However, this can be an indication that something is amiss long after the surgery has concluded. It might even be a sign that something has been left inside your body by one of the physicians in the operating room.

A Scary Tale of Left Behind Items

One woman had surgery in 2007 and continued to suffer for years afterward. She reported her symptoms to her doctors, obtained CT scans, and received many different diagnoses, including IBS and kidney stones.

When the pain would ramp up every so often, she would head to the emergency room but didn’t discover that there was something left inside from her back surgery until 2015.

In that particular case, the left-behind object appeared to be retained swabs in the left side of her abdomen close to a major artery. This kind of medical malpractice can be difficult to spot because not all of the symptoms will present the same for each patient.

You may continue to experience pain long after the surgery has concluded or unexplained medical symptoms, but it can be more difficult to spot when this situation has occurred.

In fact, other physicians may not be able to identify right away, leading you to feel like perhaps you are imagining the entire experience.

However, if you continue to live through symptoms that make your life difficult on a day to day basis, it is far better to follow up with your medical team and to determine whether or not something has been left behind.

Some of the most common signs that something went wrong with your surgery include:

All of these could be signs that something is wrong and warrant a conversation with your physician about the situation.

If no one can find the root cause of your problems, you might want to suggest that something could have been left behind after the surgery.

Although these are words no one wants to ever utter, telling someone immediately could prevent the situation from getting any worse. It’s certainly in your best interest to consider telling someone else that there’s an issue.

It is the surgeon’s responsibility to carry out every procedure with a full level of focus and professionalism.

Unfortunately, being hurried or distracted might lead a surgeon to leave surgical tools in a patient’s body. It is ultimately the patient who pays the price with these kinds of medical malpractice mistakes because it can lead to numerous other complications, including infection.

The patient may not even realize, as was the case above, that something has happened until years later, suffering the pain and costly medical bills while trying to figure out what was wrong over the course of several years.

A Joint Commission investigating these issues does believe that left behind surgical events happen between 2000 and 4000 times every year across the United States.

Reporting those numbers to the commission, however, is voluntary. Those numbers are estimates and the real number of victims could total much more.

Individuals who have sustained injuries and pain associated with a surgeon leaving something behind after a procedure may have grounds for a medical malpractice lawsuit. Communicating with an experienced lawyer is essential in this situation. Do not hesitate to reach out to learn more.