Due to this, it is absolutely essential that individuals fully understand how hate crimes work in the state. This includes what is included under the definition of a hate crime, what the potential consequences are and how a person can build a defense when facing this type of charge.

What Does it Mean When You are Charged With a Hate Crime in the State of Florida? 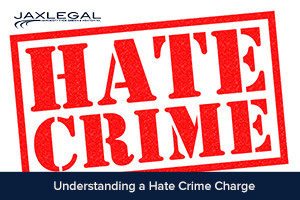 Hate crimes are defined as any type of criminal action that has been motivated by a certain characteristic of another organization, group, individual or an entire class of people. In many cases, a hate crime is motivated by factors such as disability, age, gender identity, sexual orientation, ethnicity, race, and religion. In many cases, hate crimes are used to make a statement against a certain type or group of people.

The most important factor that is considered when determining if an action is a hate crime is the motive behind the accused person’s actions. This is something that is open to interpretation, which means some people are charged with a hate crime while their motive was not actually related to a person’s identity. Because hate crimes pose a serious threat to society, the possibility of hate crimes is seriously considered.

Specifically, the state of Florida now takes any type of hate crime extremely seriously. Local law enforcement agencies have a zero-tolerance policy for this offense, regardless of the severity of the act. If something is considered a hate crime, then it will automatically become more serious regarding the consequences the person faces.

The Reclassification of Hate Crimes in the State of Florida

The new Florida Statute, S775.085 reclassified all types of hate crimes in the state and broadened the definition to make the penalties more severe. This new statute has reclassified the degree of a felony or misdemeanor if the offense was motivated by the age, disability, national origin, sexual orientation, religion, ancestry, ethnicity, color, or face of the victim.

When proving a hate crime occurred, the most important determinate is motive. Some of the evidence considered include:

Building a Defense Against a Hate Crime Charge

If you are charged with a hate crime, the first thing you should do is hire an attorney who has prior experience with these types of cases. In order to be able to successfully prosecute a hate crime case, the state has to prove the defendant committed the crime and prove that the intent of it was motivated by some type of prejudice.

In some cases, a Florida defense attorney will be able to focus on showing that their client did not try to target a certain group of people or that they did not commit the crime. This may be done by providing evidence that it was committed because of another reason, for example, money. Or it may also be the establishment of an alibi that shows their client could not have been involved.

When it comes to hate crimes, the best thing a person can do is contact an attorney for help. The team of attorneys a Hardesty, Tyde, Green, Ashton & Clifton, P.A. can be contacted at 904-414-4906 for more information.