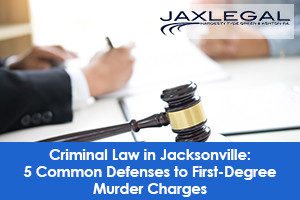 Most states have three types of murder charges, first degree, second degree, and third degree, but regardless of which type of murder you are arrested for, it is a serious charge that can result in decades of prison time if you are convicted. That’s why it’s so important to know the five ways to get off on murder charges.

Murder is defined as the intentional killing of another person. Florida law defines first-degree murder in three ways, including:

Because first-degree murder is considered a capital offense in Florida, there are only two sentences if you are convicted of this crime: death penalty or life without the possibility of parole.

Those are grim possibilities, but there are five defense strategies that lawyers use to fight a first-degree murder charge.

Wrong-Person Arrested is a Common Defense to Murder Charges

One of the first things a defense lawyer will do in a murder case is to make sure that the police arrested the right suspect. In other words, defense attorneys will look for any possibility that police have charged the wrong person with the crime.

Although this seems like something that only happens in the movies, there are real-life instances in which police are guilty of mistaken identity, and arrest the wrong person. This can occur for several reasons but is usually because the person arrested is in the wrong place at the wrong time, or the person arrested has a physical resemblance to the real culprit.

Self-Defense is Another Defense to Murder Charges

Defense lawyers can also argue that the murder was not a murder, but that it was done in self-defense. But the self-defense strategy can be tricky because you have to have used “reasonable force” to defend yourself against a fear of death or of serious bodily harm.

Reasonable force is defined as the force necessary to eliminate the threat. So for example, if someone tried to shoot you with a gun and you killed that person, this would be considered reasonable force.

But if someone tried to attack you with pepper spray, and you shot that person, it would be difficult to argue that you used reasonable force to stop the threat of death or bodily harm.

Other important aspects of self-defense are that you cannot have instigated the situation, and you must have made an attempt to avoid the danger or retreat from the danger before you killed that person.

Insanity Is a Defense To Murder Charges

The insanity defense has become nearly comical because it has been used in so many movies and TV shows that we all tend to roll our eyes when a real-life defendant employs this defense strategy.

But there are some situations in which this defense is legitimate, especially if the person who committed the crime has a diagnosed mental illness.

In most states, the insanity defense isn’t used for the purposes of allowing a defendant to escape legal consequences but it’s about to what degree that person is liable for the killing.

Defending Another Person is a Defense to Murder Charges

Sometimes, a killing occurred because you were trying to protect another person and in the act of protecting that person, you killed the attacker.

To make this strategy successful, your lawyer must prove that you used the proportionate amount of force necessary to stop the threat of death or serious harm.

Your lawyer must also prove that the person you defended was under immediate threat of harm, and that force was required to protect that person from harm.

But you also have to know that some actions you take will not fall under the defense of other’s legal strategy.

For example, if you learn that someone you love is being attacked and you rush to the scene only to discover that the attacker is gone and that your loved one is hurt, you can’t then pursue the attacker after the incident and use deadly force.

That’s because when you claim defense of others as your legal strategy, your actions must take place at the moment the person you defended was attacked.

Any other action you take that occurs after the incident will not fall under this defense, and in fact, your lawyer will have to come up with another strategy.

Establishing an Alibi is a Defense to Murder Charges

The first thing you see in many TV crime dramas when the police arrest a suspect on murder charges is that the defendant claims that he or she has an alibi.

An alibi is evidence that proves you were somewhere other than where the murder took place, which of course means that you couldn’t have committed the crime.

But for an alibi to be credible, you need to have elements such as witnesses that are credible, and you need to be able to anticipate any holes that the prosecution will try to poke in your alibi defense.

Examples of a strong alibi defense include alibis that are supported by:

It’s important to remember, however, that your alibi must be rock-solid, with no room for the prosecution to call it into question. Unfortunately, many alibis are no rock-solid.

For example, if surveillance video showed you at a shop at 10:30 in the morning and the murder occurred at 10:40, and the shop was within a 10-minute ride from the murder scene, the prosecution could still argue that you had enough time to leave the shop, race to the scene, commit the murder and leave the scene.

But the other thing to remember is that an effective alibi is one that creates what is known as ‘reasonable doubt,’ which is the key to any murder trial.

It is up to the prosecution to disprove your alibi and any alibi that can create doubt in a jury’s mind that you were at the scene. This can go a long way towards an acquittal.

Murder trials often rise and fall on how effective the prosecutor is at convincing the jury that there is no doubt you committed the crime.

So anything that your lawyer can do to raise doubt in one juror’s mind can sometimes be enough to prevent you from being convicted and spending the rest of your life in jail, or worse, ending up on Death Row.

The Right To Mount a Defense

Everyone who has been arrested on murder charges has the right to a defense, but all defense lawyers aren’t the same. Your life and freedom are at stake in a murder trial, so that isn’t the time for you to gamble with a law firm that has only tried a few cases, or a law firm that doesn’t have a demonstrated track record of acquittals. From the moment that the police arrest you on murder charges, your first call should be to an experienced firm that can mount an aggressive defense. This means that you should never speak to police officers or detectives without a lawyer present, and you should exercise your right to remain silent regardless of the threats or intimidation that are used against you.

The team at Hardesty, Tyde, Green, Ashton & Clifton, P.A. have decades of experience as homicide defense attorneys in Jacksonville. Please contact us today at 904-414-4906 for a free case evaluation.